Walking through the plains of ancient Tegea, we find our steps leading us along the pathways of a powerful Arcadian city-state, which during its peak occupied the southern part of eastern Arcadia. According to the myth, the city of Tegea was the home of Aleus, who is said to have built the famous Temple of Athena Alea in the region. In terms of etymology, the name Tegea is associated with the Greek word “tegos”, which means roof, alluding to the fact that it was a sheltered and walled-in city. Tegea flourished and grew economically during the Roman Imperial period. During the Byzantine era, around the 8th-9th century AD, Tegea was renamed to Amyklion, and was also nicknamed Nykli.

Tegea, together with Mantineia, were two of the greatest cities in Arcadia during antiquity. According to ancient myths, Tegea took part in the Expedition of the Argonauts and in the Trojan war, led by King Agapenor.

Pan, Athena Alea, the poet Anyte of Tegea, the historian Ariaithos, Diotima, mythical or real figures, influenced the life and activities of the Tegeans throughout their long history.

The Tegeans stood out as founders of colonies, such as those on Crete, Cyprus and elsewhere.

A long history, marked by internal and external migration, full of difficult struggles for dominance, progress and survival.

As a settlement based on a city plan, ancient Tegea was established relatively early. This political development was the product of a synoecism of the villages across which the Tegeans were dispersed. The city wall – very few parts of which were found during past excavations – had an ovular shape, a 5500m perimeter and five gates. It included the modern-day villages of Alea, Episkopi and part of Stadio, and had been built on a level plain. In the center of the enclosure, which is currently known as “Palaia Episkopi”, we find the agora, the political, religious and cultural centre of ancient Tegea. In this archaeological park, one can find a section of the ancient city’s theatre, under the church of the Dormition. The monument was funded by Antiochus IV Epiphanes in 174 BC. West of the theatre, one can take a tour of the enclosed archaeological site to see the remains of a palaio-Christian three-aisled basilica and a few traces of the ancient agora’s eastern boundary.

The impressive park of Palaia Episkopi hides within it, apart from captivating natural beauty, many remnants from all historical periods. The Byzantine church of the Dormition was built on the ancient theatre and served as the metropolitan church of the Diocese of Amykles. In its current form, the church was built in 1888 based on Ziller’s designs and was adorned with the exceptional frescoes of A. Asteriadis. Facing the western entrance of the church, there are rows of tall trees leading to the few ruins of the walls of Nikli and the marble column dedicated to the Olympic Games and the first torch relay for the Berlin Olympics (1936). To the southwest of the park, in the old Housekeeping School, stands one of the best Folk Museums in Arcadia.

Visitors to the Folk Museum have the opportunity to see the entire culture and daily life of rural Tegea unfold before them, through the numerous objects/exhibits which are a treasure trove of memories. These are remnants of a different era, which bring to life the modern heritage of Tegea.

The most famous monument in the ancient city of Tegea, however, is the temple of Athena Alea in Alea. The architectural designs of the classical marble temple are the work of one of antiquity’s most famous sculptors, Parios Scopas. Pausanias stated that it prevails among all the other temples in the Peloponnese in terms of construction and size. The exterior of the temple is fairly plain, with the exception of the sculptural compositions of the gables, which are inspired by local legends. Around and outside the city, in the broader region of ancient Tegeatis, there were of course many more temples and places of worship, which flourished during antiquity. Two of them are the temple of Artemis Knakeatis, at the “Psili Korfi” site above Mavriki village, and the Sanctuary of Demeter and Kore in the Agios Sostis settlement of Tegea. Ancient guard posts on hills of the villages in Tegea and various other ancient remnants make up the puzzle of ancient Tegea, bearing witness to another era.

Today, Tegea encompasses the large geographical area of the plain, which is on the eastern side of the Mantineia plateau, 8 km from the city of Tripoli, and it includes a total of 16 villages: Alea, Vouno, Garea, Episkopi, Kamari, Kandalos, Kerasitsa, Lithovounia, Magoula, Manthyrea, Mavriki, Rizes, Stadio, Strigkou, Tziva and Psili Vryssi. This is a predominantly agricultural area. Its plain is one of the most fertile in Arcadia, full of orchards, gardens, vineyards and crops. It is fertile land, and a promised land for Arcadia, which is cultivated by its residents, producing exceptional apples, pears, cherries, potatoes and vegetables, the most popular of which is the fragrant garlic growing in the region. During spring, a walk through the dirt roads of the plain is a unique experience, with the blooming apple and cherry trees creating a beautiful landscape full of the fragrances of the blossoms. In the squares of Tegea’s villages, visitors come across majestic churches, each one with its own history. In the area of Tegea, at an altitude of 650m, lies Lake Taka, which is an important wetland of the Peloponnese, with birds and fish. It is also an important source of water for the crops in the Tegeatic plain. The religious feasts throughout the year and the large fair held on 15 August in Palaia Episkopi are popular events attracting visitors from the region and beyond.

A point of reference for the region of Tegea is the Ancient Museum of Tegea, which was completed in 1909. In 2005 and 2013 it was included in European operational programmes, which led to an upgrade of its premises and its reopening. It is now a contemporary model museum, which smartly combines its exhibits with any available digital media, completely changing its old image. The exhibition programme of the Museum tells the story of the birth and growth of Tegea, the most powerful city in ancient Arcadia. The temples are the area’s highlights, especially the temple of Athena Alea. In 2016 the Museum received a special commendation at the European Museum of the Year Awards.

The square of Stadio village is dominated by the Metropolitan Church of Saint Dimitrios. Next to it lies the building of the Cultural Center of the Michael N. Stassinopoulos – VIOHALCO (MSVF) Public Benefit Foundation. The Cultural Center is housed in a renovated two-storey building with a plain design, and is a cultural hub for the entire region of Tegea.

Soon the Foundation will expand to include building B, which lies a few meters away from the main Cultural Center, and will house workshops, an exhibition space and other amenities. 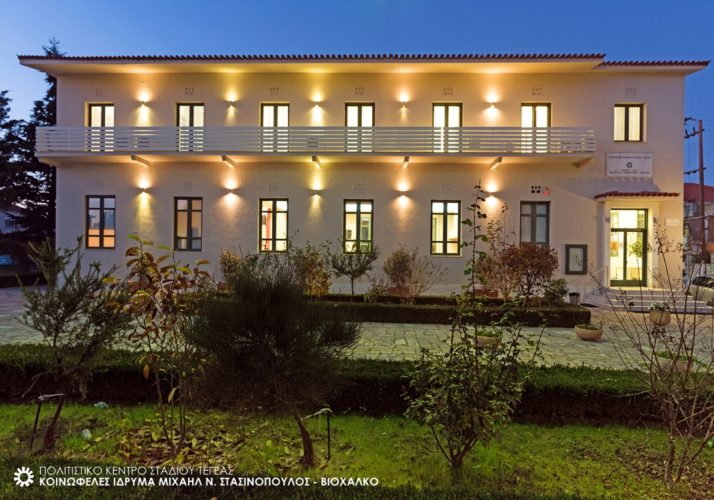