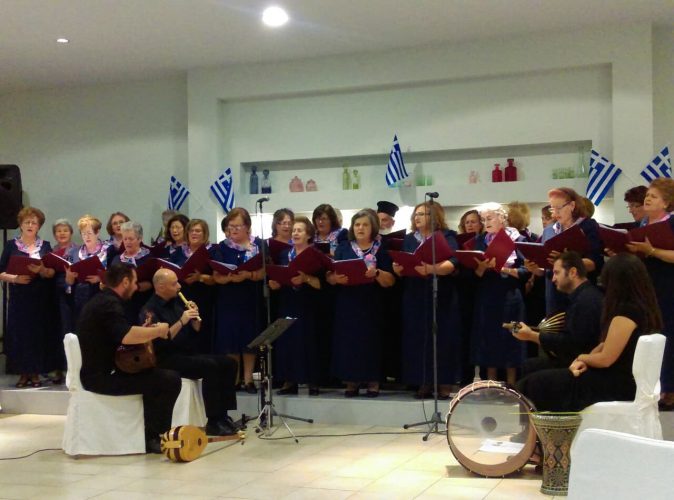 On Wednesday, 23.10.2019, the Foundation’s Adult Choir, with its choir master Mr Zacharis and musicians Kyriakos Markogiannis, Nikos Papailiou and Sofia Paraskevopoulou, took part in an event held by the Greek Orthodox Tradition Association of Nemea during the first choir meeting organised by the Nemea Association to celebrate the Greek national holiday of 28 October. The choir of Nemea also took part in this event, with Mr Karpouzos as choir master, and was accompanied by the Nemea Dance Group. The event opened with speeches about the anniversary of 28 October, which were followed by traditional songs by the Foundation’s Choir and the choir of Nemea. The Nemea Folk Dance Group closed the event with traditional dances. The event was recorded and broadcast a few days later on the TV show “Sergiani sto horio” on the Corinth SUPER channel. The members of the Foundation’s Adult Choir received a heartfelt applause at the end of their performance, as well as a thank-you gift for their participation.