Clothing is anything we use to cover our body, whereas costume includes all clothing, mainly exterior items. The form of the costume results from the practical and aesthetic needs of the specific group of people that use it. A costume is, like all expressions of traditional folk creation, a practical item, and as such it is created, exists and is evolved based on the practical needs it must meet. Thus its main materials and its appearance are determined by the natural and social environment, by which it is bound. The materials used by the women and traditional craftspeople were made by themselves. The ways in which these materials were used were always based on rules resulting from the unification of many generations of experience.

For costumes, the aesthetic perception of the group provides the chromatic scale within which the person can operate, whereas the inherent tendency of people for decoration gives each one the distinct local/group expression that makes it stand out. The adornments that cover surfaces without perspective and plasticity, give form and shape to the decorative motifs with incredible freedom in inspiration, crystallizing and at the same time expressing the aesthetics of the group.

The dresses reveal a complex of human life, group life, which obeys its own laws and bears the stamp of long-standing experience and loyalty. Loyalty to the cohesion of the family and group, the importance of social unity and tradition. This social reality, way of life and unwritten laws are not always and everywhere the same. The history of each place, even if only a village, and its basic needs and circumstances are the source of each diversification in the expression of the creation. The make of the costume is determined by two more factors: the age of the person (daughter, bride, newlywed, married for years, elderly, for women and men respectively) and social class. These elements determined the way in which they sewed and embroidered each component of a costume. Because in their life, each one takes its functional place in a strictly determined order. The form of the costume is, as we would plainly put it, the mirror of the person wearing it. Taking this into consideration, women’s costumes fell under three main categories: costumes with the “sigouni”, with the “kavadi” and with the “foustani”, and men’s into two: the “foustanela” and the “vraka”.

The ultimate form of the costume was based on the difference between the materials, the way it was sewn and decorated, and, where they existed, foreign influences and the contributions of trade. That is why we often encounter a mix of those elements that compose the three pure types of dress. The richness of the materials, the variety of the solutions in cutting and sewing into the basic parts of the customs, such as the shirt, the “sigouni”, the “kavadi” or the “foustani”, the decoration and materials, the themes and colours, are what create the main differences. The headdress and jewels that complement each costume, even further underline these differences, although frequently the analysis of the materials that comprise them and the way they use them reveals their shared origin. Substantially, their differences are due to the weather and the financial and generally practical and aesthetic needs, which the residents of each area had.

The Group has a rich collection of folk costumes from many regions of Greece. The collection of folk costumes is housed in a room at the Cultural center of the Michael N. Stassinopoulos – VIOHALCO (MSVF) Public Benefit Foundation, which has been particularly designed for this purpose. The Group, on its part, has placed special emphasis on the study and promotion of the Mavrofoustano, (black dress) which is the traditional women’s dress of Tegea.

THE “MAVROFOUSTANO”: The traditional festive costume of the women of Tegea

It got its name from the main component of this costume, the “mavrofoustano” (black dress), which is what distinguishes it from other costumes. The “mavrofoustano” is a sleeveless dress, open at the chest, fitted around the waist with a pleated skirt. Its beauty lies in the red felt skirt. The felt is embroidered with colourful thread in various cross-stitch designs. The two ends of the “mavrofoustano” dress are raised in the front up to the waist revealing the petticoat, which is white, with cutwork embroidery, at the same length approximately with the “mavrofoustano”. Over the “mavrofoustano” they initially wore the zipouni and later the kontogouni. The “kontogouni” was made of thin felt or velvet, in various colours with golden embroidery or velvet of various colours with golden sequins, with sleeves at the end, the so-called kalkania which reached a few centimetres under the elbow. From inside the ‘kalkania’ emerge the maniketiausually made of silk. On the chest they wore the trachilia. Over the “mavrofoustano”, in the front, they wore the apron usually made of silk. On the head they wore the bolia, a narrow silk scarf with fringes on both ends, which they tied in different ways. Later they wore the red fez, with a golden string, 0.40 m long, and with a silk tuft with a length of approximately 0.80 m, the so-called papazi. These details on the women’s dress of Tegea apply from 1830 and onwards, namely a few decades after the 1821 revolution. 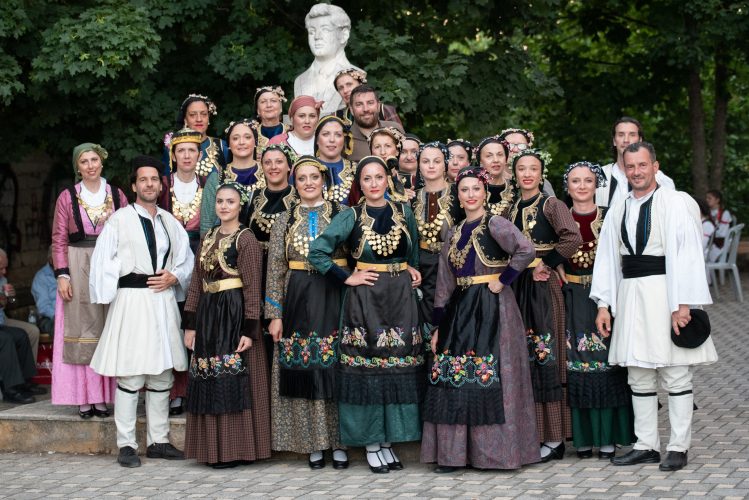 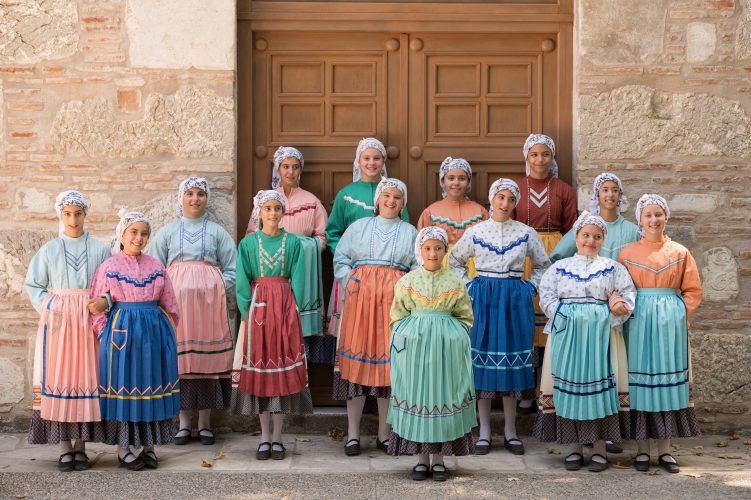 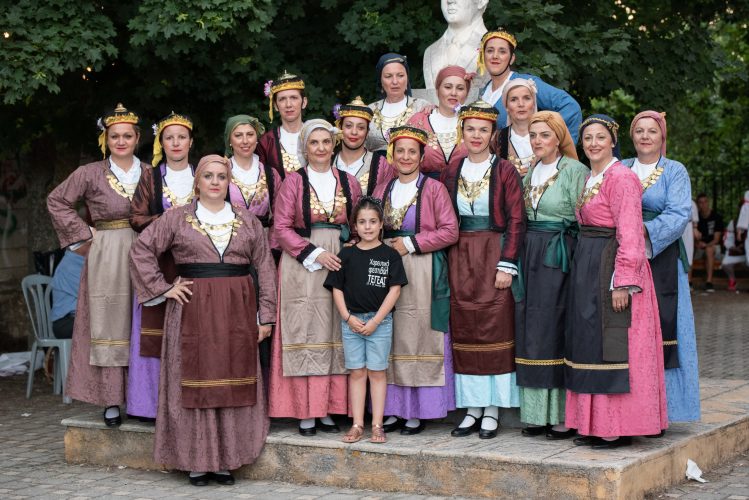 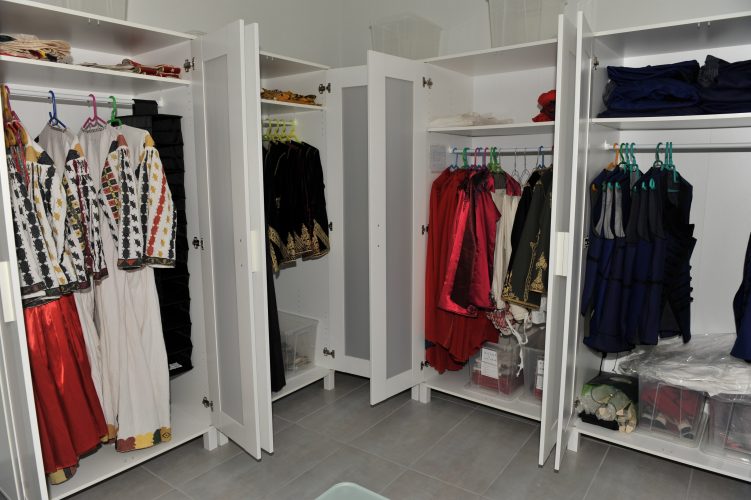 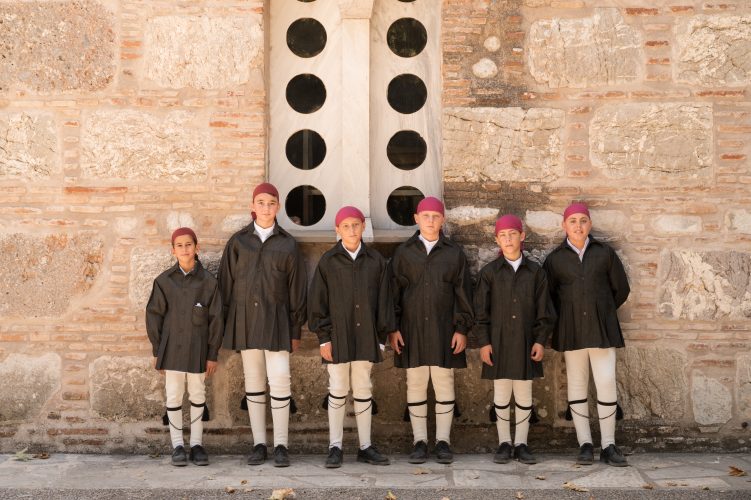